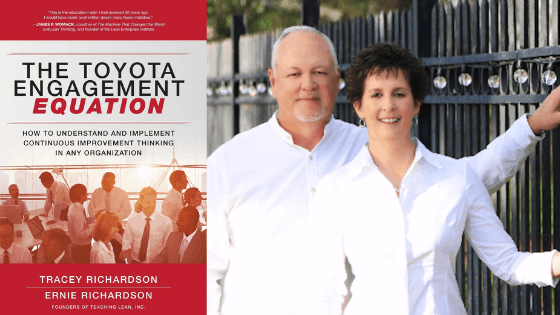 As you can probably tell from the title of the book, the insights here have been tried and tested at Toyota. They’ve also been emulated elsewhere but with less success, and the authors explain why. They say it’s “because they place Lean tools and specific results ahead of Toyota’s number one priority – developing people.”

You could be forgiven for worrying that this book is going to be nothing more than a propaganda tool for Toyota, but you’d be doing it a major disservice. Yes, Toyota is used throughout to provide examples, but the authors don’t hesitate to put that into the context of the wider business landscape by showing what other companies are doing right and wrong.

The good news is that the two authors clearly have the pedigree, and it quickly becomes obvious that they know what they’re talking about. The husband and wife duo are the co-founders of Lean Inc. after working together at Toyota, with Ernie alone serving for more than 25 years. But we’re not here to sell the Richardsons. We’re here to learn everything we can from the book they wrote. Let’s dive on in.

How to Understand and Implement Continuous Improvement Thinking in Any Organization

Part One: Leading and Learning in Georgetown, Kentucky

Tracey sets the scene by taking us back to 1988 when at the age of nineteen she received a phone call inviting her to apply for a highly coveted job at Toyota. She wasn’t to know that applying for the job would change her life forever – and eventually lead her to write a book with her husband.

One of the good things about this book is that it also includes comments with many of Toyota’s big hitters, such as Pete Gritton, the Former Vice President of Human Resources at Toyota Engineering and Manufacturing, North America. Talking about the company’s HR policy, Gritton says, “When it came to hiring the right people, it was really all about the culture, although we weren’t necessarily using that term at the time. We talked about what we needed from our people to be successful. They didn’t necessarily have to have a high school diploma, but they needed basic reading, writing and math skills, and they needed to be able to think logically and critically and to come into our plant and think about how they do their work and how they could do it better.”

This provides us with our first lesson, which is that it’s better to hire people with the right attitude and ethos and to train them up than it is to hire people who have all of the qualifications on paper but who don’t quite fit in with the company. Tracey was lucky, which is why she was hired to start work on August 1st, 1988. One of her earliest memories is of seeing people in the local area wearing red “Team Toyota” t-shirts before she started and then receiving one her first day. It was a small act from her employer, but one that made a big difference to the onboarding process and which we’d all be wise to learn from. It made her feel at home right from the start.

Toyota is successful – and also envied – because of its successful adoption of Lean principles. But Toyota succeeded where others didn’t because of one vital difference. “As I see it,” Tracey says, “the key is understanding the difference between the people side of Lean and the tool side. The people side will always be the most difficult aspect – here you need the discipline to create this thing called culture. The tools are just what they are, mostly countermeasures to change some discrepancy in our process. For the tools to be successful, people must understand their involvement or the purpose behind the tools.”

So it’s not enough to simply provide people with the tools that they need, especially in today’s fast-paced world. Instead, managers need to create a culture of learning in which everyone’s on board with the philosophy of continuous improvement. This applies from the most entry level of employees all the way to top. It’s reminiscent of when John F. Kennedy asked a janitor at Nasa HQ what his job was and the janitor replied, “I’m helping to put a man on the moon.”

The Richardsons argue that in order to improve, we must first have standards. That means setting and measuring metrics, but it also means understanding why they’re there in the first place. It also means pushing yourself beyond mere compliance, so as Toyota’s goal was to “build a car in the time that the customer demands,” going beyond compliance might mean delivering the order ahead of schedule.

This section is rounded out with a chapter on leaders and leadership. Not everyone is naturally equipped to become a true leader, but everyone can work towards it. According to the authors, becoming a leader requires you never to be comfortable, embracing challenges instead of shying away from them. You also need to be willing to spend as much as half of your time developing other people.

This section starts with a chapter dedicated to discipline and accountability, which the authors refer to as the key to continuous improvement thinking. Constant improvement needs to become the new normal, and discipline and accountability are required to make sure that happens. “In competitive markets,” the authors say, “companies must continuously evolve. If a company like Apple wants to just maintain its market share, it has to innovate all the time, and if it wants to gain market share, it has to move even faster.”

Time is a key theme in this chapter because innovation is a race against time. While all this is happening, companies must also demonstrate that they have time for both their customers and their employees. They have to solve problems and put out fires, too – after all, business is never plain sailing.

When it comes to solving problems, the authors suggest following The Engagement Equation: GTS6 + E3 = DNA. Don’t worry if that sounds complicated though, because it’s pretty easy to break it down.

GTS6 represents each of the elements of problem-solving:

E3 stands for Everybody Everyday Engaged, while DNA is the DNA of your company and the thing that ultimately determines your company culture. The rest of the book is dedicated to this concept and breaks it down in further detail. Let’s investigate each of those elements of problem-solving.

This concept stems from Toyota’s Japanese heritage. According to John Shook, Chairman, and CEO of the Lean Enterprise Institute, “There’s a longstanding tradition in Japan to not trust words. This stems from the very Zen idea that words don’t capture the experience.” In order to solve problems, you first need to take a look at them.

The authors explain that there’s a saying that a problem clearly defined is a problem half-solved. To do this, you must work with facts instead of assumptions, clarifying problems and perfecting the fine art of asking questions. Once you’ve successfully broken down the overall problem into a set of smaller, prioritized problems, the next step is to choose the most appropriate area to pursue a quick fix.

“Get to solution is our term for the thinking behind making changes in a methodical way while involving people at every stage,” the authors say. “Whether we changed a standard, tested a process improvement or made adjustments to a process to accommodate a model change, we were always following the basic Get to Solution thinking.” This involves identifying the root source, mapping out a course of action, brainstorming the best ideas and effecting change.

Implementing a change will be ineffective unless you can make that change the new standard. To do this, the authors provide an acronym, DAMI:

Define the standard: Define the expected results based on internal and external customer needs.

“Sustaining sounds like it should be easy,” the authors say. “You’ve made measurable process, and you’ve proven that it wasn’t just luck. You’ve documented all the steps that got you there and created a new standard for everybody to follow. Now all you have to do is stick to the path you have created. The hard work is already done, so there’s no problem here, right? Wrong! Sustain is perhaps the most misunderstood aspect of continuous improvement. Not only is the work to sustain just as hard as the work that created the gains in the first place, but also the difficulties here tend to catch people off guard, leaving them confused and discouraged.”

This final phase is all about taking that sustainability and supercharging it, ultimately making change a part of your culture. The authors highlight this concept by pointing to the words of Deanna Hall, an Associate in the Mining Sector: “We actually have a motto here, and it’s ‘Raise the bar.’ What that means is that you’re always learning, and you’re always challenged to be better. If you did great last year, next year you have to do even better. And I think that’s part of the stretch: always challenge to be a little better.”

Ultimately, the authors argue that the goal should be to establish a management team that puts people first. They hinted at this earlier, with the assertion that managers should spend at least half of their time developing their staff. You also need to invest in people if you want them to develop and to reach their full potential.

A great example of this is provided by John Shook, Chairman, and CEO of the Lean Enterprise Institute, who said, “Taking hundreds of people to Japan for three weeks or more was a huge expense and effort. Many of the team leaders and group leaders had never been overseas. Many had to scramble to obtain their first passport just in time to make the trip! Some got a little homesick, and others struggled with the food, not to mention the language, of course. But almost all found the three weeks working alongside their counterparts in Toyota City to be a life-changing experience. Seeing is believing, and there is no substitute for the actual physical experience of working on a Toyota assembly line.”

By applying the Toyota Engagement Equation, you should be well on your way to understanding and implementing continuous improvement thinking across your company. Just remember that good enough is never good enough, and that you should lead by example and push both yourself and your employees to constantly find new ways to improve both yourselves and the work that you do.

Who knows? If you put the work in and tap into the moral zeitgeist of the 21st century, you might just be able to follow in Toyota’s footsteps. And while we’ve covered the main lessons in the book, there are plenty more for you to learn from if you pick up a copy. It’s also worth reading just for the personal stories that Tracey and Ernie share along the way. Good luck.

Get your copy on Amazon HERE!!!!

Read Other Book Reviews on OSW:

link to How outsourcing HR can save businesses money

Given the current economic and political climate, a lot of businesses are really starting to feel the squeeze. While HR isn’t an area that you want to compromise in, it can quickly become a major...