Workplace related stress is a huge problem around the world. The most common reasons for workplace stress are fatigue, lack of sleep, headaches, lack of energy, and more. Fortunately, companies can take care of these issues by establishing career growth measures, employee involvement, work-life balance, and employee recognition.

of Americans work is a major source of stress? Perhaps, stress is a personalized phenomenon that can widely vary in different situations. At a certain stage in life, we all come across stress — be it at home, school or work. Although stress is normal, it can become a problem if not treated in time.

According to numerous studies and surveys, occupational pressures and fears are the leading sources of stress while others say that workplace stress occurs when there is a mismatch between the capabilities of a candidate and fulfilling requirements of the role at a workplace.

In this post, we are going to learn about 50 workplace stress statistics. Let’s have a look:

According to a recent survey by Everest College

, a whopping 83% of the U.S. professionals are stress at their jobs. The reasons for the stress are too much work, low pay, poor work-life balance, lack of professional development opportunities, lack of job security and not being at the correct field.

2. $300 billion in lost productivity due to workplace stress

According to a report by Health Advocate

, stress has a negative impact on the productivity of a worker, and it can result in $300 billion loss productivity.

According to a recent study by the American Psychological Association

, more than half of the employees feel that their employers don’t care about their work and personal life.

4. 75% of workers believe that today’s employees are more stressed out

says that although technology is meant to make work easier, that doesn’t make employees feel that they have it worse than the employees in previous generations. (25 Stress Relief Products 5. Around 70% of employees feel that they are overloaded with work

According to an Employee Engagement report by Tiny Pulse

, more than 70% of workers feel that there are not sufficient hours in the workweek to complete the work.

6. 14% of employees want to hit their colleagues

A survey by Gallup

shows that 14% of employees wanted to hit their colleagues due to workplace stress.

Compared to relaxed peers, stressed out employees have higher health care costs. According to recent studies, 90% of visits to the doctor’s office can be associated with stress.

8. 60% of employees are guilty of presenteeism due to stress

Some employees can call out for work when they are a guilty conscience. Several stressed-out workers visit their workplace if they don’t want to. Out of five, three workers say that they have lost productivity due to stress.

9. More than 20% of workers spend time thinking about stress

According to a survey from Colonial Life

, more than 20% of employees spend more than 5 hours each week thinking about their worries and stressors. Other 50% of workers said that they lose between 1-5 hours of work to stress each week.

revealed that nearly the third of two thousand survey respondents cited unclear expectations from supervisors’ is the major reason for stress.

11. Adults consult their GP each year due to work stress illness

states that 12 million people seek advice from their GP due to mental illness related to work stress. Also, one-sixth of the population experiences anxiety.

According to a study

, 495 of Americans experience at least one major stress trigger that includes problems at work as well.

On a scale of one to ten, the people of America rated their average level of stress at 4.9

. This also clarifies that people are experiencing stress including workplace stress regularly.

A whopping 80% of employees feel stress at work

. Around half says that they need help to manage their stress and 42% says their colleagues need help. According to the Harvard Business review

16. 46% believe the biggest source of workplace stress is the workload

, the workload is the primary source of stress and for 28% its the conflict with co-workers.

17. 79% of people quit their jobs due to Lack of Appreciation

As per Global studies

, 79% leave their job citing ‘ lack of appreciation’. According to workers, they don’t leave companies; they leave bosses.

18. 31% of Americans affect their ability to maintain work-life balance

19. 56% of employees say their job performance suffered due to strain

. Their job performance suffered due to the strain.

20. Employees say anxiety and stress impacts their life to a great extent

, employees say that stress and anxiety impact their work life too much. It impacts –

– Relationship with peers and coworkers (51%)

21. Stress at the Workplace is driven by Politics, A.I. (Artificial Intelligence) and pressure to master new skills

from Udemy reveals that United States workforce prioritizes professional development and new skill acquisition, which is becoming the primary cause of stress among American Workers.

According to the stats

, 83% men and 72% women, says that workplace stress carries over to their personal life

23. Less than 40% of employees talk about their stress to their employer

According to the Anxiety and Depression Association of America

, less than 40% of the workers who stress comes between their work, talk to their employer about:

– 34% fear their boss would interpret unwillingness or lack of interest to do the activity.

– 22% Fear it could affect their promotion

– 20% Fear not taken seriously or being laughed at 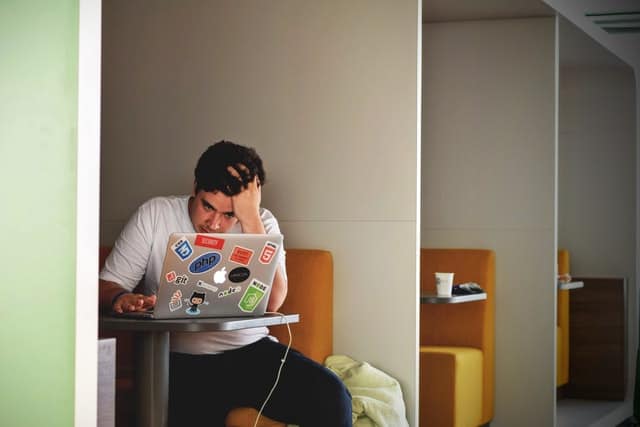 According to a report by The Gallup-Healthways Well-Being Index

, around 77% of people in offices experience physical malfunctions regularly caused due to work stress.

26. 73% are dealing with psychological issues by stress

says that a lot of people are dealing with mental health problems as they are unable to cope with stress at the workplace.

27. 33% of workers say they are dealing with severe stress

When it comes to regular stress or extreme stress, there is a bit of a difference. Extreme stress involves serious physical malfunction like mental breakdowns and panic attacks. 33% of employees

deal with this type of stress in the workplace.

28. 76% of workers cite work and money a major cause of their stress

Workers are overloaded with work and are underpaid; this also causes them stress. According to a report, 76% of workers

claim that work and money are one of the most obvious causes of stress.

29. An abundance of work stress cause you to stay up late at night

Sleep is good for your health. It feels fresh to wake up well-rested after long working hours. However, stress from work can cause you to wake up late at night. 48% of workers

reported lying awake throughout the night due to stress.

30. 75% of U.S. employers consider stress as their No.1 workplace health concern

According to the survey

conducted by Willis Towers Watson in 2015/2016, 75% of the U.S. employers ranked stress as their major health concern. However, employers and employees disagreed on its causes.

According to ResearchGate, the physical environment of a workplace affects both job satisfaction and job performance

. Lack of ideal physical environments such as indoor air quality, poor lighting, and ambient noise can decrease job performance to a great extent.

According to a survey conducted by Statista

, 31% of the respondents reported that issues between people are a major source of stress at the workplace.

33. Stress at work leads to fight

As per a study by The American Institute of Stress

, 54% of the employees said that stress had caused them to fight with people close to them.

According to a report shared by Gallup

, 87% of the employees on a global level are emotionally disconnected from their place of work and are less productive due to workplace stress. 35. Absenteeism due to job stress

As stated by The American Institute of Stress

, an estimated one million miss work each day because of workplace stress.

36. Depression results in greater disability to work than other chronic conditions

As reported by the National Center for Biotechnology Information

, depression results in more days of disability as compared to chronic health conditions like diabetes, cancer or heart diseases.

37. New hires are most likely apply for a new job after a bad day at work

According to a survey by West Monroe, 45% of the new hires

apply for a new job after having a bad day at their workplace.

38. Employees work harder if they are happy at their workplace

As per a study released by One4All, 39% of the employees

will work harder if they are happy at their current place of work.

Randstad reported that 58% of the employees

had left their jobs due to negative office politics.

41. Some companies regard revenue more important than the treatment of employees

As per a report shared by Randstad, 59% of the employees

feel that their companies hold more value for profits and revenues as compared to how the employees are treated.

42. Working at home reduces the stress of commuting

FlexJobs conducted a survey that revealed 71% of the workers

feel more productive at home due to reduced stress from commuting.

A Survey by FlexJobs

also revealed that 77% of the respondents believed that flexible job options would make them more healthy and 86% said that their stress-level would reduce. 45. Incident or bad experience results in employees changing their job

According to research presented by Jobvite

, a third of job seekers leave their jobs within 90 days period, and 34% of the respondents cited that they were driven away from their jobs due to a bad experience or incident.

46. Workers may call in sick due to job stress

Research by The American Institute of Stress

shows that 12% of the employees call in sick due to workplace stress.

47. Employees look for a new job when they feel stressed

As per Wrike’s research, 60% of the employees

look for a new and less stressful job and at least a quarter of them leave their current workplace.

48. Workplace environment can be a deal-breaker

A survey by Randstad

showed that 38% of employees want to leave their current jobs because of a toxic work environment or when they feel they don’t fit in.

A study by Queens School of Business

Research conducted by The American Psychological Association states that more $500 billion is deducted from the U.S economy due to stress at the workplace and 550 billion days of work are lost each year because of job stress.

I have researched and found 25 awesome stress relief products

that will not only help you get rid of some stress, but they might also make you giggle.