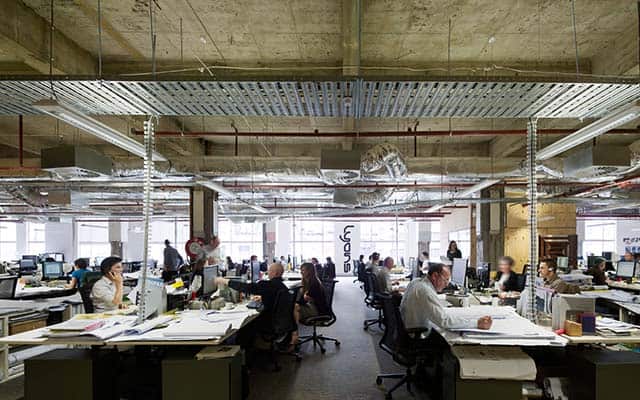 The layout of an office has a lot to do with its productivity. Therefore, while working on an office layout, it is crucial to consider a few factors. It includes the strength of the company, the level of interaction required, and the work-life balance. Choosing a suitable office layout is pivotal for productivity and progress of a company.

In this article, we have listed 50 open plan office statistics that may help you decide whether to implement it or not.

Whether you require an open office, a private office, or a combination of both, assess which design would best suit your industry, employee preferences, and job functions. Now, if you are opening an office with an open plan, it will allow your employees to sit close to each other. The design may suit or backfire, which entirely depends on the suitability of it. Here are some of the advantages and disadvantages, which may help you decide whether to implement it or not.

– Elevates work culture of a company

– Creates an extra-space and more room for new recruitment

– Offers flexibility in case of reshuffling of the seating arrangements

– May causes a security threat

Without a doubt, open office is the most widely accepted layout. Whether a company is listed in the Forbes 500 or is an aspiring start-up, open office layout is being implemented by everyone. The layout plan has numerous pros but a few cons as well. So, if you have decided to have an open office layout, keep in mind that it should help create a positive company culture. A right plan will not only help you reach new heights of productivity but also creates a pleasant work atmosphere.

Clearly, there are more benefits than drawbacks. Are you still confused? We have got you covered with the top 50 open plan office statistics. It can help you decide whether to go for an open office layout or not.

1. With the implementation of open space, the utilization of email and office messaging software shot up by 67% and 75%, respectively. (The British Psychological Society

2. As per research on a sample size of 10,000 employees, 95% of respondents said that working privately matters to them the most. However, only 41% of employees were capable of doing so, and 31% had to go outside the office to complete their tasks. (Steelcase

4. On average, employees lose 86 minutes each day at a workspace due to distractions around. These distractions may be due to the irrelevant speech from employees or funny office pranks. (Research Gate

5. 45% of the employees in the U.S. are less likely to work in open-space offices than employees in other countries. (Gensler

7. Employees are 12% more likely to be happy at the workspace when they get the freedom to work. This is in contrast to the open-space layout, where noise and privacy are the main areas of concern. (Gensler

8. Open-space office distractions affect employee focus and decrease productivity from 15% to 28%. Despite that, 70% of all U.S. offices follow the open-plan layout. (Forbes

9. Staff working in open-plan offices are 62% more likely to take sick leaves as compared to the ones working in a private office. Open office employees take an average of 3.1 sick days in a year, compared to 1.8 sick days for employees who worked from home. The core reasons behind such sick building syndrome include headaches, weak immune system, respiratory issues, and stress. (NCBI

10. 31% of workers in the U.S. say they control their original ideas and opinions while on calls due to the lack of privacy offered by open space. Moreover, they think that this kind of working environment allows people to hear and judge them, which creates a negative perception. (Room

11. Open offices occupied 3 times less space as compared to the other layouts. (Linkedin

12. Switching to an open space office boosts email traffic. Additionally, employees in open-space send 56% more emails to other participants. It is mainly because, in open-space, they better recognize employee networks. (Entrepreneur

13. The hustle and bustle of open-space offices can lead to a 32% fall in employees’ well being and decreases their productivity by 15%. (The Telegraph

14. 59% of employees feel that an open space office provides an enjoyable atmosphere; 56% think that it allows them to interact with others (56%). And 55% believe that it helps to build a sense of community around themselves. (Deskmag

15. Out of the 50 major countries with the highest density of open space offices as compared to their population, Luxembourg, Singapore and Ireland arises as the leaders in this category. Luxembourg has 8.5 new open spaces every year for every 1 million inhabitants. (Coworking Resources

17. The open-office concept is cost-effective compared to the private office. It allows the business to maximize the office area while minimizing costs. The ratio of advantage is from 3 to 1 or 5 to 1. (Watchdog

18. One out of five employees found it difficult to effectively complete the task expected from them in an open space layout. (Room

119. In a survey of over 12,000 employees in 17 countries, it was found that 49% of UK employees are based in open plan offices; more than twice the global average (23 percent). Meanwhile 17% of workers do not have a fixed work location – due to hot-desking or nomadic working – compared to just eight percent globally. (Workspace Insight

20. In a survey of 456 employees from 20 US architecture companies, 86.7% of these companies are working in an open-plan office. (Frontier Sin

21. Employees prefer a private office over an open-space office as it allows them to focus more. Additionally, open-space involves more multitasking and small distractions. It may cause you to lose focus for more than 20 minutes a day. (BBC

22. 90% of recent studies on open-space has shown that it may lead to stress, conflicts, and high blood pressure. (Study

23. The culture of traditional office design is vanishing in the U.S. Around 70% of the offices in the country are composed of some kind of open-space design. Only a few companies have moved back into conventional office layout, composing of spaces with walls and doors. (Gensler

24. To avoid the distractions of open-space, around 56% of employees wear headphones frequently. (Flex Jobs

25. One out of eight U.S. open space layout employees considers that this kind of environment has forced them to look for a new job. (Room

26. Open plan offices are a cost-effective way to build and cheaper to heat or cool as it can save costs up to 20%. (Study

27. As per research on a sample size of 4,000 employees (including 400 open plan employees), 31% do not want to work in open space as it lets people hear and judge them. Moreover, 16% of employees feel that it is affecting their health and 13% of them consider it as a strong reason behind leaving a job. (YouGov

28. Around 68% of employees complete their job tenure in a traditional office. Despite the wide acceptance of open space offices, the traditional office layout offices are still the most popular option. (Clutch

31. Only a small fraction of employees would prefer working in a fully open or an utterly private workspace. Over 77% of employees like to work in an office atmosphere that falls between the open and the private space. It means an office design with a combination of both. (Gensler

32. Research on 231 office workers showed that employees in open-plan offices have 32% more level of physical activity in comparison to the private offices and 20% more than office cubicles. (BBC

33. As per a survey, around 66% of employees blame open plan offices for greater dissatisfaction and productivity loss than any other single environmental factor. (UK GBC

35. Employees in an open space office can be up to 66% less productive, mainly due to the nearby conversations. (Tech Radar

36. Millennials and Gen Z workers at open space offices have more resistance to deal with distractions than their Gen X and Baby Boomer counterparts. Being tech savvy, the younger workers are used to this kind of environment. Therefore, Gen Z (55%) and Millennials (56%) prefer open offices compared to Gen X (47%) and Baby Boomers (38%). (Poly

37. Employees are 15% less productive in the open office layout. Mainly, because they face concentration problems even while working in quiet offices. (Robin Powered

38. Offices that communicate effectively can generate 47% higher profits than their counterparts. Open plan space allows employees to communicate with each other easily, troubleshoot issues, assign tasks, and wrap up a project faster. (HBR

39. 38% of employees believe that open office space encourages knowledge due to sharing of ideas. (SSB

41. Open space offices in Asia-Pacific have the highest share of the overall office stock at 2.1%. It is more than double of what Europe and North America’s share is, which is around 1.0%. (All Work

42. One out of eight open space layout office employees feels disconnected from their senior staff working in private offices. (Room

43. Open-plan offices cost about 20% less than their traditional layouts. It is because open offices require smaller pieces of furniture with no room separators or temporary partition walls. (Study

44. It is difficult to multitask amidst small distractions as they  cause us to lose focus for around 20 minutes each day. (BBC

45. As round 16-50% of the employees are introverts. Open plan offices are unsuitable for the people who are introverts as they tend to respond more intensely to sensory stimuli, and rely on undistracting environments to be highly productive. (Quills

47. Millennials and Gen Z workers at open space offices have more resistance to deal with distractions than their Gen X and Baby Boomer counterparts. The younger workers are more tech savvy. Hence, they are used to this kind of environment. Therefore, Gen Z (55%) and Millennials (56%) prefer open offices compared to Gen X (47%) and Baby Boomers (38%).  (CIO

49. As per a survey, around 50% of employees considered the lack of sound privacy as a big area of concern for them. Moreover, more than 30% objected to the lack of visual privacy.,(Science Direct

50. 87% of employees favored cell offices, 8% preferred open space offices, and 5% of them feel satisfied with their job while working in flex offices. (SSB

Check out similar statistics summaries we have prepared:

link to How Can Employers Manage Staff From A Distance?

Managing staff from the physical proximity of a traditional office was straightforward; a manager or higher-up could check on a team by approaching their cubicle or workroom. The changing work...

Working outside of the office was definitely a thing before the pandemic, but its popularity has increased by leaps and bounds over the past few years. This happened mostly from necessity, but...