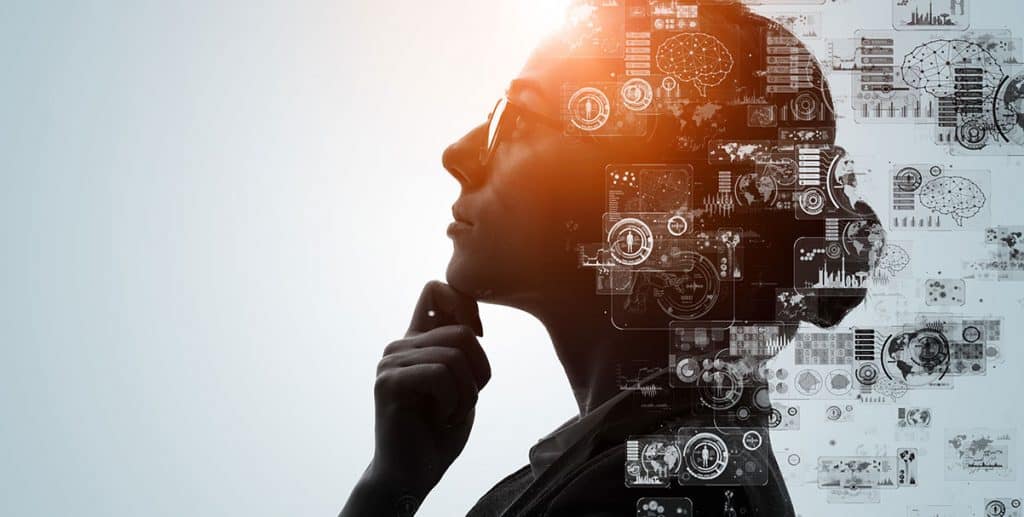 Machine intelligence is also known as artificial intelligence and is a brand of computer science that focuses on giving machines the ability to perform tasks and calculations that typically require human intelligence.

Many people’s minds jump straight to futuristic robots when they think of machine intelligence, but there are already hundreds of existing examples where this kind of technology has been integrated into our everyday lives and carries out tasks that we don’t give a lot of thought to. Everything from smart assistants on our phones to chatbots on commercial websites is controlled by machine intelligence, and as technology grows more advanced these systems will likely find their way into almost every aspect of day-to-day living.

Automation and AI have recently got many people starting to wonder whether computer technology will take charge of their role at work in the near future. Whilst it is unlikely that robots and intelligent systems will render humans useless in the workplace, there are many industries where changes are being made to the way things are done and new technology has been used to improve efficiency, safety, and productivity.

Fears of machines taking over the workplace aren’t accurate, but it is true that many workplaces have already been affected or are likely to be altered in the future by the introduction of AI machinery. Here are four examples of what this looks like in today’s working environments.

Automation is perhaps the most significant way that machine intelligence is changing the workplace in a wide range of industries. Repetitive tasks and manual processes are some of the hardest roles for human workers to consistently perform without error or eventual injury, and automation software takes away this problem by getting robotic machinery to do the tasks instead.

The industry that this has had the biggest impact on is the industrial one where equipment has been created that builds products, performs quality checks, and assembles packaging. Using human workers to carry out these tasks would be much more time-consuming and the chance of occasional error would be high, whereas automating the majority of processes means that tasks can be carried out much faster and for longer periods.

Automation software is also increasingly getting used to complete online tasks that were previously the responsibility of human employees. The finance, security, and IT industries to name just a few are all starting to make use of intelligent systems that can perform analysis and be programmed to make decisions based on complex series of events, which again removes the chances of human error and can make a process much more efficient.

From search engine crawlers right the way up to industrial machine automation, the applications of this software are widespread and likely to only keep going as technology grows more advanced.

A classic example of machine intelligence that almost everyone will have come across online is website bots. These simple AI systems are created to answer common questions and provide direction or advice in the place of a human customer service worker, which not only saves money but also removes the repetitive and boring element of having to answer the same kinds of questions over and over again.

As well as helping to direct potential customers around the site and answering simple questions, bots can also be used as the first stage of selling or upselling a service offered on a website. If a certain pathway is identified that often leads customers to make a purchase, other user behavior can be monitored and then targeted if a bot identifies that they also might be likely to pay for a service or product.

One of the benefits of using bots

as first contact sales reps is that it’s an incredibly efficient tactic that allows you to perfect the language you use to pitch your offering and then (hopefully) get the same successful results every time. Once an effective automated process has been established, a lot of time and money can be saved as well as freeing up members of your sales team to work on more complex proposals or target potential customers further down the buyer funnel.

This approach does have limitations, however, a lot of successful sales conversations rely on the nuances of human interaction which even the most sophisticated chatbots can replicate in the same way. Some potential customers might also be put off by having an automated bot trying to sell them something whilst they’re just browsing a site, which could reduce their chances of converting to a customer later on.

One of the biggest advantages of using machine intelligence to control robotics systems and machinery is that it is much safer than conventional machinery or human-operated equipment.

Industrial workplaces, in particular, can be very dangerous places to work if there are large machines, hazardous substances, and sharp or heavy equipment in use. Machine intelligence software has much smarter safety protocols than traditional industrial technology, meaning that accidents and injuries involving the equipment controlled by the software are much less likely to happen.

Collaborative robots are another example of AI machinery

that is much safer than its predecessors, using sensors to detect nearby people or other machinery and implementing safety protocols to avoid collisions and accidents.

Machine intelligence also allows for greater safety in other kinds of workplaces, whether it is used as part of a security system or risk-avoidance protocols are programmed into the software. This can affect the working environment by making it safer for employees overall and also reducing the chances of human error leading to a safety or security issue, both of which have plenty of benefits to employees and their employer.

Since AI and Industry 4.0

became hot topics, there has been plenty of media attention on fears that smart technology and automated systems are going to take over people’s jobs and cause mass redundancy across the population.

Whilst it is likely that some roles will eventually be replaced by AI systems and machinery, these are only likely to be in positions where the work was repetitive, boring, strenuous, or dangerous, which is a benefit to the human workforce. Plenty of experts have predicted that having robots adopt many of the simple but necessary jobs in a range of industries will give workers more time to focus on meaningful tasks and pursue rewarding roles which will increase the overall satisfaction of working life.

More importantly, however, the integration of machine intelligence into the workplace is more likely to create as many new jobs as it will be taking away. No matter how effective smart systems and machinery are, designers, developers, engineers, technicians, and operators will all be needed to produce them and automation engineers will need to be recruited by expert controls and automation engineering recruiters

to keep them running, which will open up plenty of job opportunities for those who may have been ‘replaced’ by robots.

A study by the OECD

found that 14% of jobs in 32 countries have a 70% chance of automation. When you consider how many new opportunities will be created by the need for automatic technology, the likely future changes to the workplace are overwhelmingly positive.

Machine intelligence and the fourth industrial revolution are well on their way to changing the way that we work for good, and whilst progress has been seen more prominently in some industries, it is unlikely that any will remain completely unaffected. The benefits of these changes massively outweigh any doubts or disruptions, and the potential for how this technology may be used in the future is full of exciting possibilities.